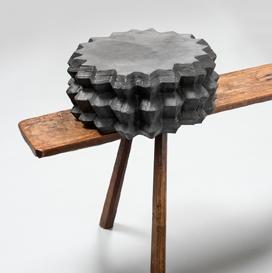 Charlotte Barker is a sculptor making primarily large-scale work in clay, and with more recent installations she has been incorporating wood. Charlotte is intrigued by the irregularities of the handmade object and the creative territory that lies between impulse, intuition and technical skill. Charlotte plays with the viewer’s perception of material qualities by experimenting with the surface and texture of ceramics and wood. Recent work explores the painterly properties of the surface of ceramic vessels, contrasted with the natural markings of the newly sawmilled wood benches that elevate them.

Charlotte graduated with an MA Ceramics from the Royal College of Art (RCA) in 2015 and the Glasgow School of Art in 2010. While at RCA she was awarded the Eduardo Paolozzi Travel Bursary for a research trip to Ghana and Togo. Recent exhibitions include The Pioneers, Scottish National Gallery of Modern Art, and Fresh, British Ceramics Biennial, Stoke-on-Trent.

The structure known as hirta was designed by Naomi Mcintosh and realised in collaboration with architect Bruce Brebner and designers Sam Booth and Maggie Savage of Echo Living. hirta is a design platform promoting Scottish contemporary design and interdisciplinary collaborative projects, and they commissioned this fascinating piece.

The hirta structure, with its dynamic modular form, is designed to be reconfigured in different formations making it recognisable but continuously changing. It aims to capture public interest and act as an anchor for conversations about craft and design. 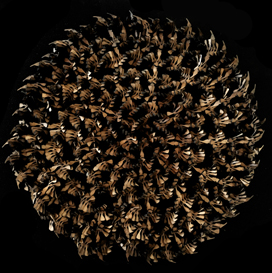 Naomi Mcintosh works on different scales from jewellery and sculptural objects to installations. With an architectural background, she creates spaces by using techniques similar to an architectural model maker. Her pieces explore the relationship between the body and objects, and how volumes, patterns, planes and forms are seen.

Naomi works primarily in wood, combining a broad range of skills that include handmaking and digital processes, and taking inspiration from pattern, movement, landscape and the natural world. By using planes and lines, forms are suggested, transforming two-dimensional surfaces into three-dimensional objects. 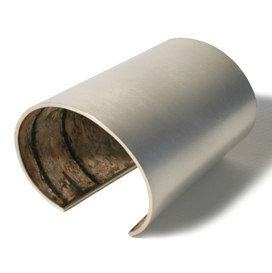 The remote environment Beth Legg comes from on the far north coast of Scotland has strongly influenced both the work she produces and the materials she uses.

Her work is rooted in a delight in the poetic nature of metal, wood and stone, and in her fascination with both their surface and content. She has always been fascinated by the hinterlands and quiet edges of places. Beth aims to reflect in her jewellery, the beautifully bleak and elemental nature of the Scottish landscape.

Beth’s career has included periods where drawing, writing, and curating have dominated but her jewellery making has always remained constant. She works from her studio in the Trossachs National Park. Her work is currently on display at the Scottish Design Galleries, V&A Dundee and at Inverness Museum and Art Gallery.