Dawn Youll is a ceramicist, originally from Sunderland, now based in Glasgow. She studied ceramics at Glasgow School of Art and later at Cardiff School of Art & Design UWIC. Alongside her studio practice she has worked in the Scottish film and television industry and is currently Craft Programme Producer for Cove Park, an artists' residency organisation on the west coast of Scotland.

Her ornamentally scaled ceramic sculptures have been exhibited widely and feature in the permanent collections of the V&A (UK) and the Crafts Council (UK) and she is represented in the UK by Marsden Woo Gallery, London. In 2011 she was the recipient of an Arts Foundation Ceramic Fellowship, she was awarded a Jerwood Makers award in 2009 and she has represented the UK in the European Ceramic Context 2010 exhibition Bornholm, Denmark and Ceramics – The New Generation European Crafts Council exhibition, Paris. She has also been involved in curation, most notably Placement, an exhibition of ceramic objects from Wales and Scotland in association with Fife Contemporary and Oriel Davies Gallery in Newtown, Wales. 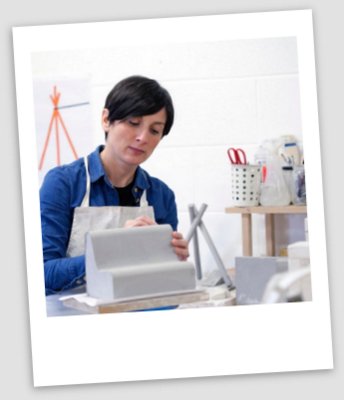