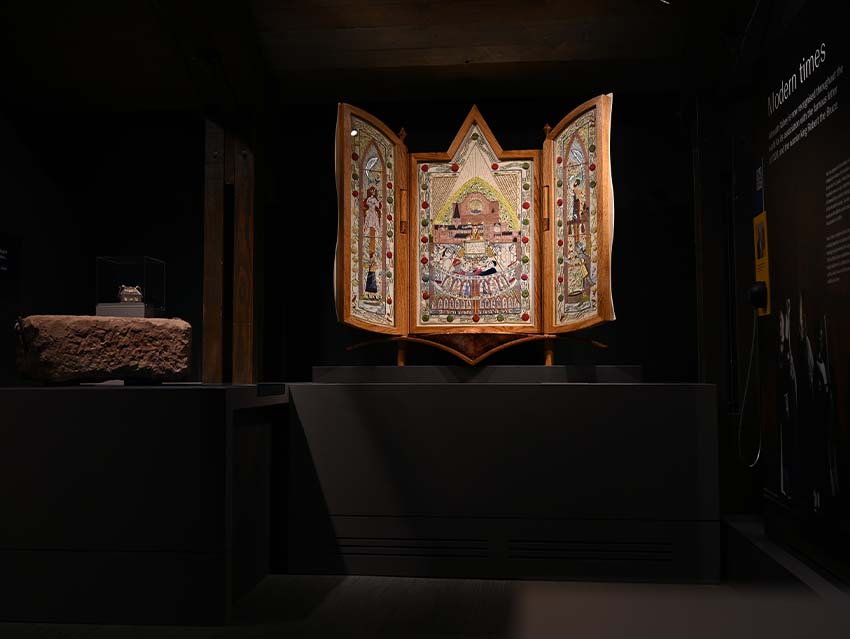 The Declaration of Arbroath Tapestry Triptych

Created and conceived over four years between 2016 and 2020, the Declaration of Arbroath Tapestry Triptych captures the legacy of this key historical document, which celebrated its 700-year anniversary in April 2020.

Lorna Ross tells us how the project came to be, the details of creating this collective tapestry and its contemporary wooden frame by Angus Ross.

Based in Perthshire, Angus Ross is best known as a designer and maker of exquisite, sculptural furniture with a sense of movement and flow. He has been innovating with wood for almost thirty years and remains curious about the possibilities of our local timber. Angus participated in renowned Collect in 2019 and 2020 with Craft Scotland and has a piece in the permanent Scottish Design Galleries collection at the V&A Dundee.

Lorna Ross has been working with Angus Ross for the last decade, mostly writing on behalf of their studio-workshop team. Lorna felt privileged to watch the tapestry evolve since May 2018.

Read on to learn about the challenges and rewards of creating this unique craft object in celebration of the Declaration of Arbroath and Scotland’s rich history.

Tell us more about how The Declaration of Arbroath Tapestry Triptych project started?

The Declaration of Arbroath Tapestry Triptych is an incredible, collaborative craft object made to celebrate the 700-year anniversary of this important document of Scottish history. The tapestry design is by Andrew Crummy, with stitching by the Red Lichties Stitching Group and frame by Angus Ross.

The Declaration of Arbroath is a letter dated 6 April 1320 addressed to the Pope and asking him to recognise Scotland's independence and acknowledge Robert the Bruce as the country's lawful king. It was written in Latin and was sealed by eight earls and about forty barons. It is thought to have influenced the writing of constitutions across the world, including the Constitution of the United States.

The tapestry began in 2016 when Linda Walker gathered a group of experienced, talented stitchers and friends to work on a new tapestry that would bring the Declaration of Arbroath to life. The stitchers were Linda Walker, Patricia Beaton, Anne Marie Bray, Rena Freeburn, Janette Nairn, Alice Sim, Jessy Smart, Mary Stephen and Margaret Wynne. Together, they set themselves the enormous challenge of creating a tapestry that would be equal to the height of embroidery in medieval times.

Linda approached Andrew Crummy, the artist for the Great Tapestry of Scotland, to design the panel. After a year of research, supported by local historian Norman Atkinson, the first panel was designed, as a pencil drawing on linen.

Researching medieval stitching led Linda to approach Christine Riley from the Royal School of Needlework to guide them for a couple of sessions. Christine stayed for the duration of the project when stitchers met in every three weeks. 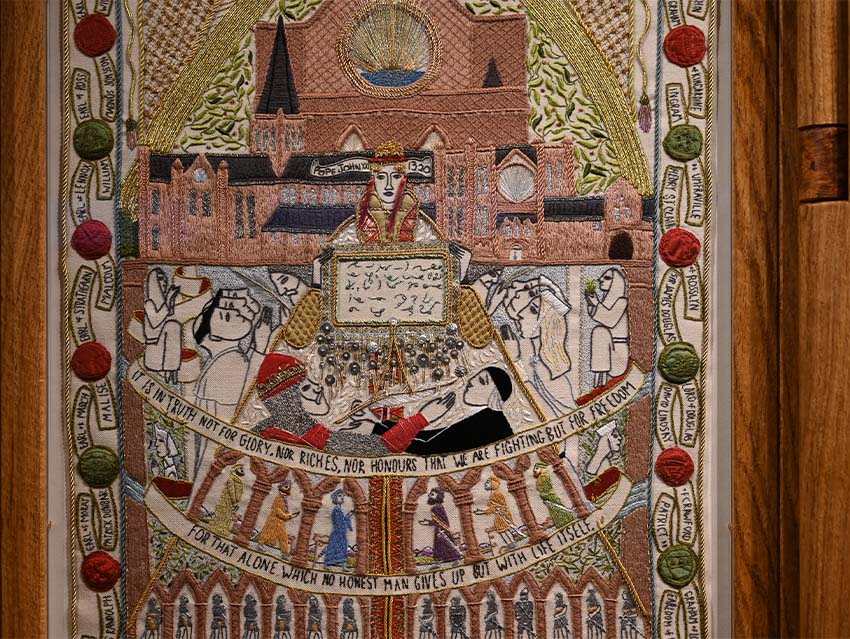 The central panel of the Tapestry Triptych, details of the key Declaration's text stitched in shorthand with metallic thread

How did the tapestry evolve, and what are some of its most significant features?

Andrew Crummy encouraged the stitchers to be creative and express their own ideas particularly in the blank sections in the design. Christine, Linda and the stitchers made collective decisions on the appropriate stitch and materials for every section of the tapestry. An example was their decision to write the key passage from the declaration in shorthand.

The embroidery is three-dimensional and multi-layered with laidwork, couching, crewel-work, interpretive embroidery, and gold and silver work. The stitchers were very experienced, having sewn since childhood, and most developed their skills in the Embroiderers Guild, and in their professional lives. They also developed their skills further throughout the project, and all said they enjoyed the collective effort in a friendly and supportive group.

The left panel depicts fishing and medicinal plants in the abbey garden, and the right panel shows a tradesman, representing all the medieval trades who built the Abbey and the knights who took the Declaration to the Pope in France. Repeated elements are the wax seals of the nobles who “signed” the letter, the Arbroath Oslins - apples brought to the abbey and unique to Arbroath - and the stitchers also “signed” the tapestry with secret symbols. 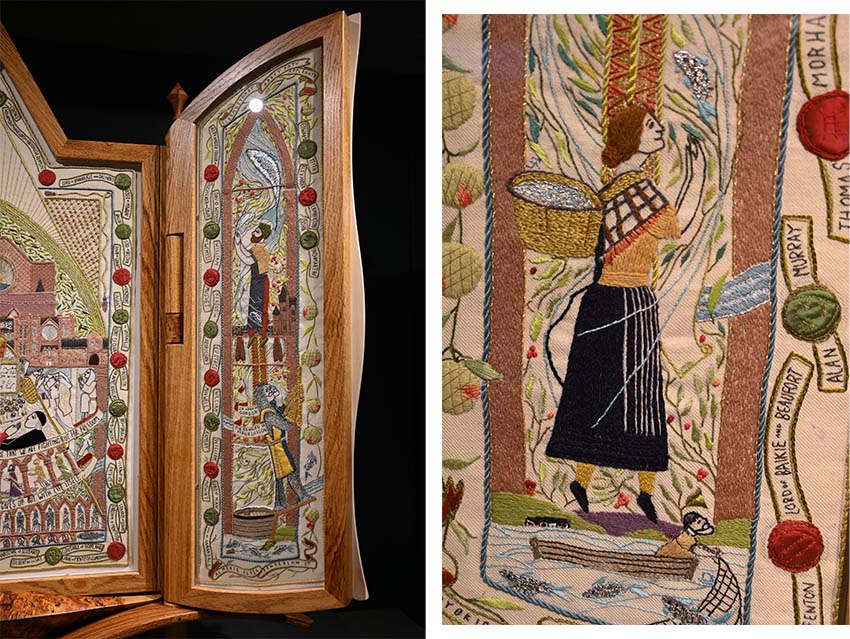 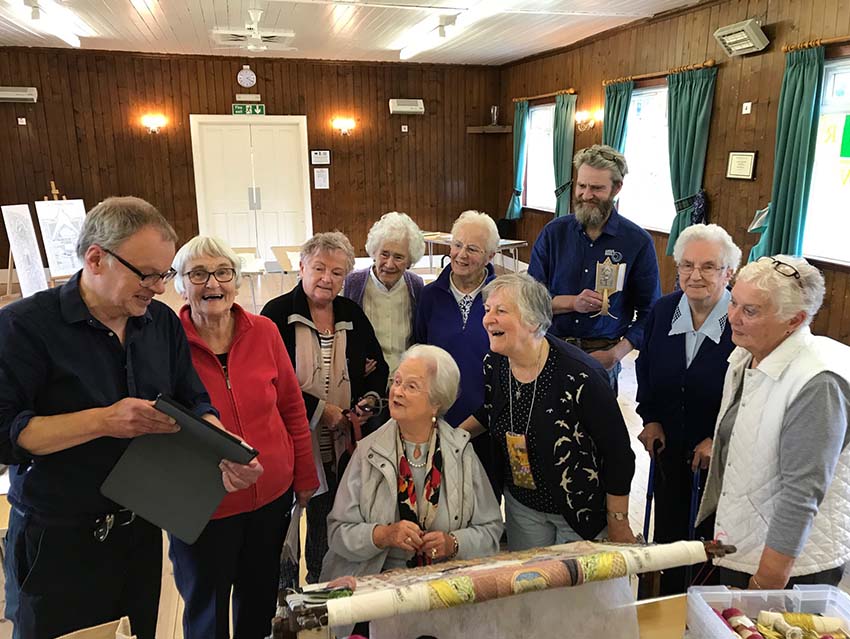 Can you tell us more about Angus Ross’ involvement with the tapestry project and the evolution of the triptych frame?

Linda asked Angus Ross to design and make a frame which would allow the tapestry to tour in November 2017. Angus suggested a folding, free-standing, triptych based on the sailing boat that left Arbroath to transport the Declaration to the Pope. The design was agreed in May 2018, and this meant that two more panels had to be designed and stitched. These new panels made it possible to tell the wider story of medieval Arbroath.

After over 2,800 stitching hours the tapestry was completed in December 2019 by which time it was so spectacular it was immediately taken into the permanent collection of Historic Environment Scotland to be on permanent display in the Visitors Centre of Arbroath Abbey. However, this meant the design for a free-standing frame with a dramatic steam-bent prow was abandoned, and materials became the focus of the new design for a cabinet.

The wood used in Angus’ work was of specific historical importance. Historian Norman Atkinson knew of a tree associated with Robert the Bruce and that may provide timber, this was The Bruce Oak, thought to be the oldest oak tree in Scotland at about 600-800 years old.

This well-documented tree grew by Strathleven House near Glasgow, the site of a manor house built by Robert the Bruce who was known for tree planting and possibly even knew this tree. A fire led to its collapse in 2004 and some salvaged burr was generously donated to be used in the cabinet. The ancient burr oak provided beautiful, highly figured dark wood that has been carved into a prow-like shape for the base of the triptych and for finials and lock spacers.

The cabinet was made by Angus Ross and Steven Gray and finished days before lockdown in March 2020. The doorknobs are turned apple wood, the interior is Scottish oak, and the exterior of the cabinet is made in Scottish sycamore. This modest, plain, pale wood is suggestive of sailcloth and provides a total contrast to the jewel like interior. It is lined with vapour impermeable barriers, to prevent fumes from the oak damaging the tapestry. 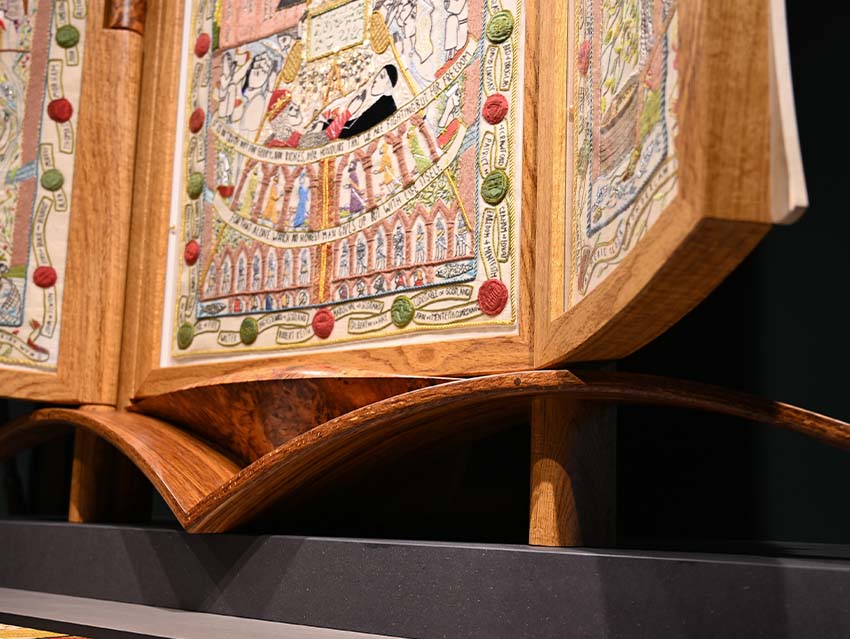 Details of the frame with the Bruce Oak 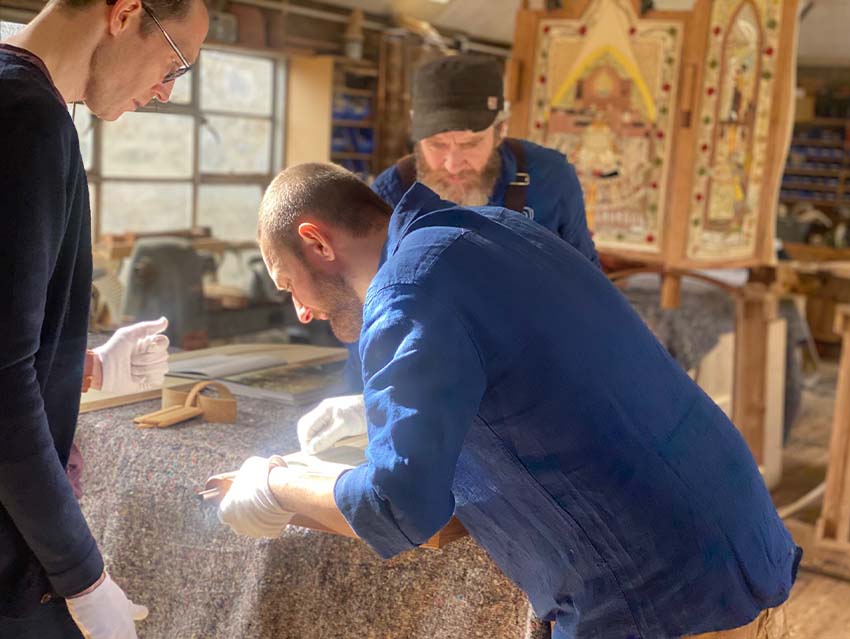 You can book online to visit the visitor centre at www.historicenvironment.scot

The Declaration of Arbroath Tapestry Triptych