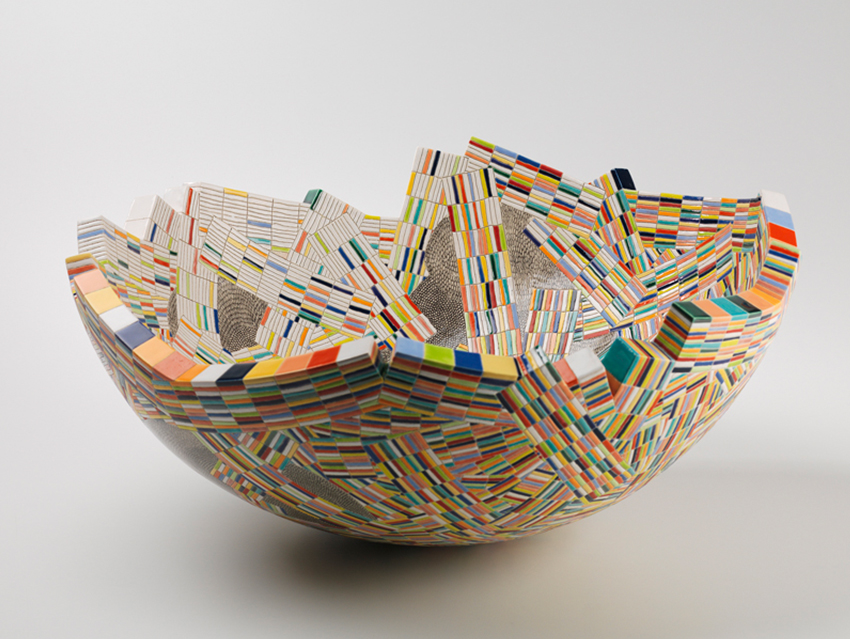 To celebrate the launch of the bursaries we invited curator Amanda Game who played a key role in shaping the awards to reflect on the Trust's legacy within the Scottish contemporary craft sector. 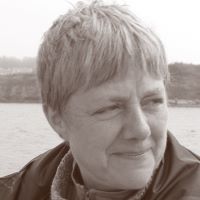 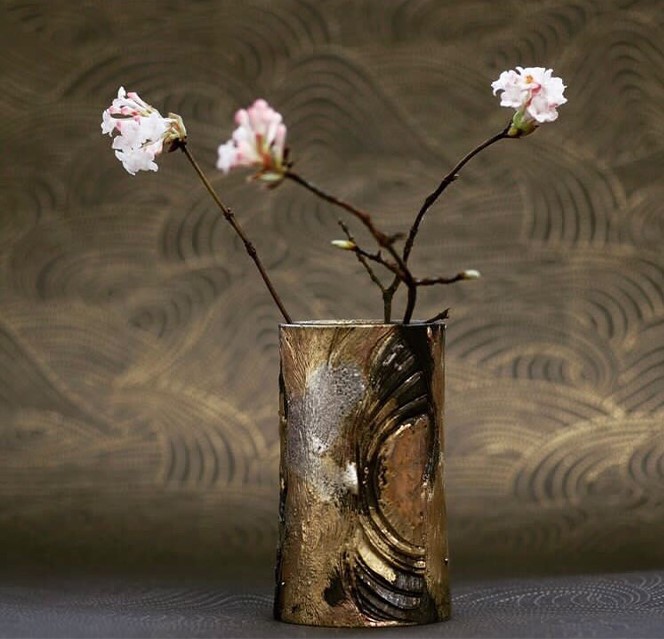 Together we worked with the Trustees to evolve bursaries which would allow established makers in Scotland to develop their work in ways of their own choosing – either through developing a particular technique or just through buying time for a more experimental period of practice away from the demands of busy and successful workshops. As one awardee, tapestry weaver Jo Barker commented:

“Funders like the Inches Carr Trust are rare. The qualities I appreciated were the lightness of touch of the application process; the provision of security for the pursuit of a particular goal; the quiet belief in the recipients.”

I remember stimulating annual Trust meetings in the offices of Turcan Connell, on the top floor of the then quite new Princes Exchange building in Edinburgh accompanied by generous quantities of coffee and biscuits. Those meetings represented a valuable, and still quite rare, opportunity to discuss, in depth, current practice across the decorative arts in Scotland in the company of those who had wide and deep knowledge of the historical context of the field in Scotland and Europe. I learnt a great deal. And I think the ‘lightness of touch’ mentioned by Jo Barker was helped by those discussions and has had real impact.

Since that time over 50 makers have benefitted from the Annual Award of first £4,000 then £5,000 with up to three awards given each year. In addition, in 2016, an annual Graduate award was instigated to the value of £ 1,000. Four Graduate Awards are given each year.

These graduate awards were a particular innovation of the next generation of Trust Advisors who included:

In 2011, I was able to help the Inches Carr Trust create an exhibition at Dovecot Studios in Edinburgh to mark fifteen years of its Bursary Awards complete with catalogue, produced with the help of Katy West, entitled Craft in Dialogue.

Each maker reflected on the impact of their own award at the time. Some, such as Glasgow silversmith and metalworker John Creed (Award 1997) had used the award to research and develop a particular material, in his case Damascus steel; others such as David Kaplan and Annica Sandstrom, of Lindean Mill Glass in the Borders (Award 2004) had researched a particular technique – Italian canework – in order to further their interest in representing the effects of light on water in glass.

One of the first makers to be given a Bursary in 1997, leading Perthshire based artist engraver and silversmith Malcolm Appleby, used his Bursary to acquire new propane and oxygen bottles for use in his innovative technique of firing gold onto to iron surfaces. As Appleby commented in a recent interview, because of this he has also been able to teach aspects of this process in his workshop to younger makers such as Karen Wallace, allowing them to work alongside him on specific pieces.  However, he stresses the importance of discovering how techniques need to be adapted and evolved to suit the development of each individual maker’s own ideas.

In the following decade the Awards continued to be disbursed across a range of disciplines. Awardees continued to report on how the Bursary provided the right sort of resourced time to develop their ideas. Edinburgh-based ceramist Frances Priest (Bursary 2012) comments:

“My award came at a point where I needed focused time to develop my studio ceramic work. I had been enjoying pursuing socially engaged residencies and projects and my studio work had been set aside. I produced some clay sketches during an education residency at Cove Park, small vessel forms inscribed with repeating patterns that defined the edges of the forms. The Inches Carr Trust award allowed me time to develop these into a larger scale and explore the use of hand-drawn digital decals. The resulting work was exhibited at SOFA Chicago in 2013 with Craft Scotland. Architekten went on to be nominated for the Weslley Barrel Craft Award in 2014. Both works are now in private collections.”

Priest’s reflections remind us of the importance of this kind of Bursary to the economic as well as to the creative development of independent studios. 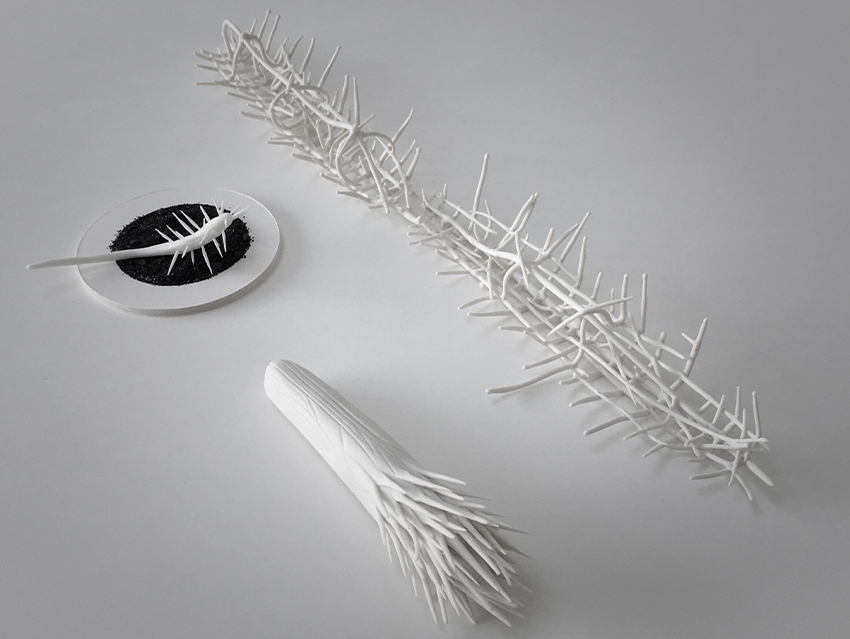 Another innovative ceramist, Annie Woodford who established her Highland studio in 2010 (Bursary 2015) used her award to buy experimental time to push the boundaries of her chosen material, porcelain, reflecting that:

“…some unexpected, interesting and often beautiful results ensued. Sometimes experiments failed but that, of course, was a learning process too. Porcelain can be a difficult material to use well, often considered to have fixed limits both in making and firing – I enjoyed pushing those limits seen in work made for my most recent exhibition at Make: Hauser and Wirth.”

A graduate Awardee (2017) is Costa Rican born, Scotland-based artist Juli Bolaños-Durman. Her installation, Our Common Humanity, commissioned by Edinburgh and Lothians Health Board in partnership with GRAS architects is currently on show at the Scottish Parliament. She comments:

“Thinking in the grand scheme of things, the Inches Carr Trust award was a brilliant endorsement, as a recent graduate, of my interest in highlighting the importance of creativity on wellbeing through my practice. I believe in thinking with our hands and fostering joy is vital, not only for our survival but more to lead a rich life. My work embodies all this and the Award gave me confidence to develop.”

In 2022, the decision has been taken to wind up the Inches Carr Trust and the remaining funds have been entrusted to Craft Scotland to disburse over the next 6 – 7 years, both within the original Craft Bursary scheme, the following Graduate scheme and one or two new initiatives still under development.

You can read more here: www.craftscotland.org

All I have spoken to have appreciated the generosity of the Trust and above all the confidence shown in each individual’s capacity to find the best way of using the Bursary. This respect for the maker’s knowledge, as much as the sum of money disbursed, seems to me one of the key reasons for the success of this innovative Bursary scheme.

Thanks are due, above all, to Robin Blair who for the life of the Trust, has enabled a genuine, and lasting investment in making in Scotland, through his modest but inspired and careful management of the legacy provided by the late Malcolm and Deirdre Inches Carr. I think they would have approved. I look forward to the legacy living on through the work of Craft Scotland.

Amanda Game has enjoyed a forty-year career as a gallerist and curator with a specialist interest in supporting contemporary makers.

Twenty-one years in commercial practice, her time at The Scottish Gallery in Edinburgh between 1986 – 2007 was followed by establishing and running an independent studio in Oxford. Amanda collaborates with gallerists, makers and clients to support ambitious practice in modern crafts throughout the UK.