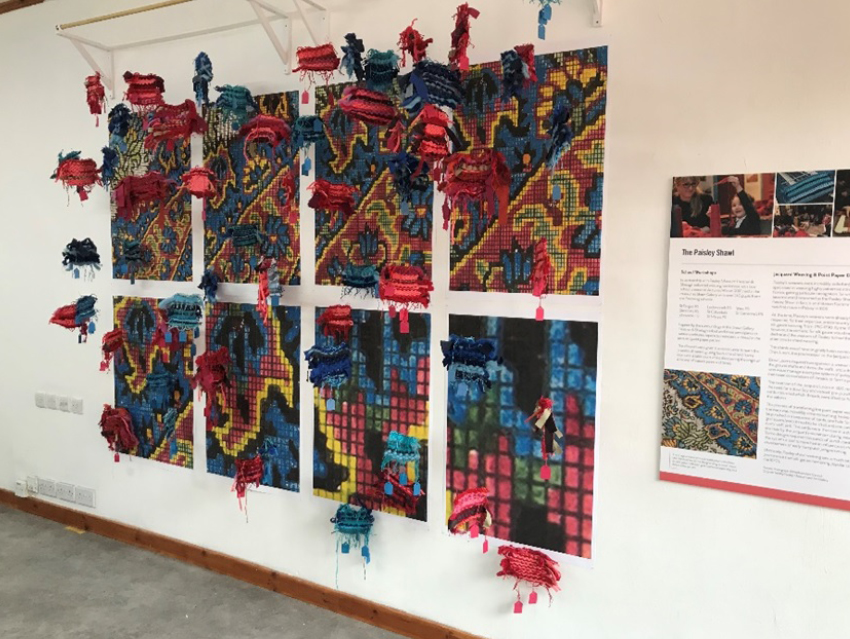 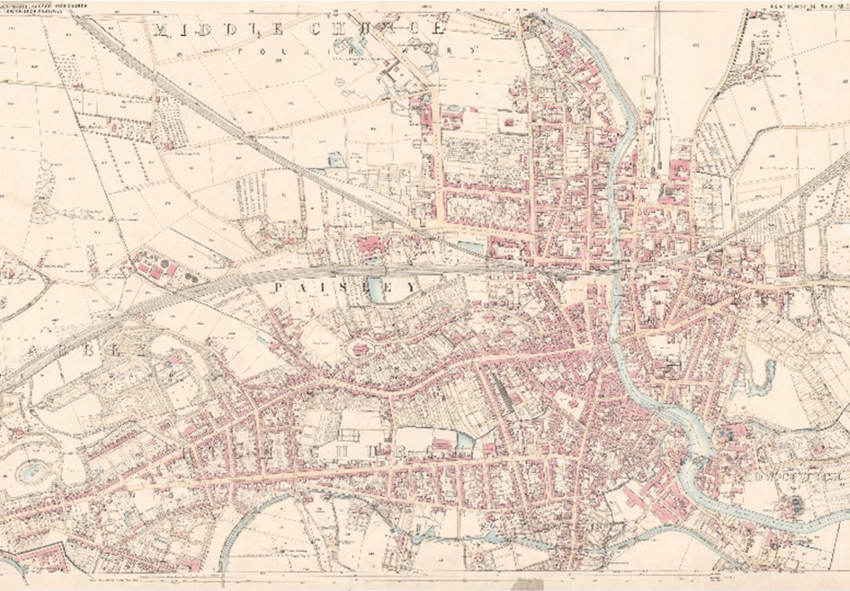 Image: annotated map of Paisley from 1857. So

In 2017, weavers Heather Shields and Shielagh Tacey became the Sma’ Shots Weavers in Residence at the Sma’ Shots Cottages. During the two years of this part-time residency, they researched Paisley’s weaving history, created a piece of work inspired by their findings, and organised a range of public participatory weaving projects at the Cottages. The project is funded by Heritage National Lottery Fund, Historic Environment Scotland & Renfrewshire Council. We talked to Heather Shields about the residency and the two weavers’ work.

Heather and Shielagh applied to the residency as a team, with the intention of exploring Paisley’s lesser known weaving heritage “particularly jacquard weaving, silk gauze weaving, and the history of domestic weaving in the context of the Sma Shots Cottages” says Heather.

She continues, “projects surrounding Paisley’s textile heritage tend to focus on well-known aspects such as the Paisley pattern or the Coates & Clark thread mills. Shielagh and I wanted to delve a little deeper, having seen for ourselves the wonderful collection of looms and equipment that Dan Coughlan from Paisley Museum had amassed over the years.”

While researching at the Heritage Centre adjoining Paisley Museum, the weavers came across an annotated map of Paisley from 1857, which would become the point of reference for both of their works produced during the residency. Charmed by the attention to details, specific marks and notes made by the mapmakers, the weavers felt inspired to capture these unique features in their own woven designs.

The map highlighted not only the most well-known heritage of Paisley’s weaving history such as the Coats & Clark family workshops or the Anchor and Ferguslie thread mills, but also many weaving mills, dye houses, shawl warehouses, and other textile related buildings. “By 1857 Paisley had managed to survive and adapt throughout many changes, including the rapid rise and subsequent demise of the silk gauze industry from 1750 – 1790 and the gradual introduction of power looms,” Heather explains. “Despite this, a healthy textile industry remained, and the map highlights the scope at which textile manufacture shaped Paisley. Because most of [these] buildings have now been demolished, [the map] provided a glimpse into the past that is now difficult to imagine.”

Heather based her jacquard designs on the buildings, with the aim to preserve their memory and highlight their importance. Specific buildings became key motifs, such as Linside Bleach Works, Caledonia Dye Works, Underwood Mill and Seedhill Shawl Factory. She began to create patterns for digital jacquard weaving, abstracting some of the shapes while leaving others in their original form, with the name of the manufacturer alongside them.

Shielagh’s dobby designs took inspiration from the geometric shapes of the buildings, focusing on the totality of the town. Weaving a pattern that would echo the irregular pink blocks and grids of the Paisley streets, Shielagh ensured the design also contained a ground weave or “Sma’ Shot” - the cottages’ namesake. 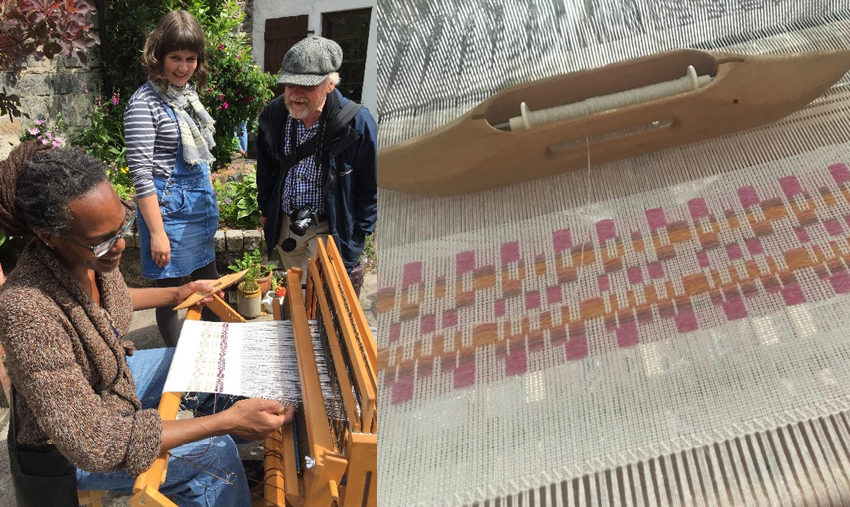 Located at 2 Sma Shot Lane, the Sma’ Shot Cottages are in fact two cottages: an original hand weaver’s cottage, and a cottage used as a mill house. The original building dates from the 1750s, it was built for cloth manufacturer Kerr & Pollock and is now the only one remaining in Paisley. Heather also notes that the weavers researched at The Secret Collection, and Paisley Thread Mill Museum, both in Paisley.

Heather and Shielagh's residency also involved working alongside the volunteers and tour guides, to provide a fully integrated visitors experience. They gave demonstrations allowing visitors to try their hands at weaving and compare the traditional looms at the Sma’ Shot Cottages with the modern looms used by Shielagh during their time at the Cottages. The link between textiles and storytelling is a strong point of interest for Heather and working with a variety of groups helped drive the project even further. Each group and individual brought energy, curiosity, and their own specific skills and knowledge. In fact, many participants were contributors to the Renfrewshire Tapestry Project, a local project aiming to tell the history of Renfrewshire in embroidery by using the Timothy Ponts Map of Renfrewshire as the boundary for the project. A copy of the Ponts Map can be viewed online on the National Library of Scotland’s Maps website. 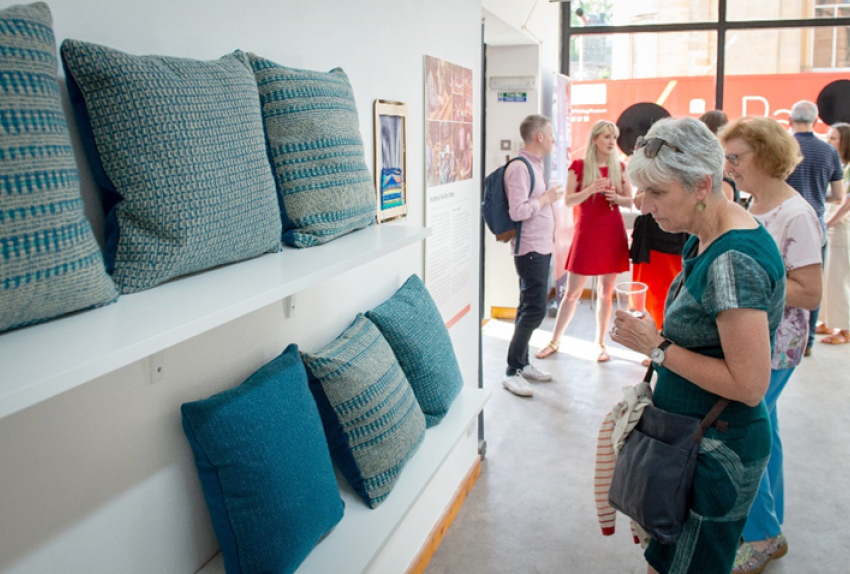 In partnership with Paisley Museum, Heather and Shielagh also delivered weaving workshops with local school children in Autumn/Winter 2017. Held in the museum’s Shawl Gallery, the workshops welcomed over 200 pupils. Heather and Shielagh were inspired by the surroundings of the Shawl Gallery and asked the participants to weave a coloured square to represent a thread, in a jacquard point paper pattern. The children had the opportunity to learn the process of weaving using both a handheld frame loom and a table loom, whilst discovering the origin of a variety of natural yarns and fibres.

Cloturing the residency, on Monday 24 June 2020, the exhibition Mapping Paisley’s Textile Trade opened at the Made in Paisley Gallery, on Paisley High St, to coincide with the Sma’ Shot Day 2019 celebrations. The show presented the research and activities undertaken during the weavers’ residency, and a public tour of historically significant textiles sites with historian Stephen Clancy set off from the gallery on Saturday 29 June 2019.

Asked about the highlight of her time at the Sma’ Shots Weavers Residency, Heather credits the team:

“The passion and tenacity of the volunteers at the Sma’ Shot Cottages was the biggest takeaway from the experience. If you get the chance to go and visit, please do.”